Today is Bhayangkara Day which celebrates the birthday of Indonesian National Police (POLRI). Instead of getting birthday greetings from public, POLRI got an infamous headline on respectable Indonesian weekly magazine TEMPO. The headline said, “Fat Bank Account of Police Officers”. TEMPO reported that a number of senior police officers conducted suspicious financial transactions. Originating from unclear sources, tens of billions of rupiah were deposited in their bank accounts, some of them under their children’s or their adjutants’ accounts. Link of the English article can be found here and Indonesian version here.

It’s public secret that POLRI are not an entirely clean institution. Senior police officers with salary lower than bank managers are known to be able to afford houses in prestigious neighborhood. Even some of those officers have their own business. Since the POLRI separation from TNI, they have tapped into businesses ran by the military officers. What is more interesting is the controversy after the magazine got published and distributed.

First, TEMPO journalists wrote in twitter that someone bought wholesale the magazines in Jakarta. Outlets had difficulties to obtain TEMPO from usual distribution path. Ten of thousands of those printed magazines were snatched from the street Monday early morning. Because of the rarity, some even managed to sell the magazine Rp 40,000 hiked from the usual price Rp 27,000. Few days later, agent could sell the magazine for Rp 100,000. Accusations rose up that police officers ordered someone to buy wholesale so the infamous in-depth report of those controversial issues could be covered up. A silly idea actually since TEMPO has online edition like above links. Wait, the silliness didn’t stop there. It was the reactions from POLRI that made this story worth blogged. It was about the cover of the magazine as pictured below. 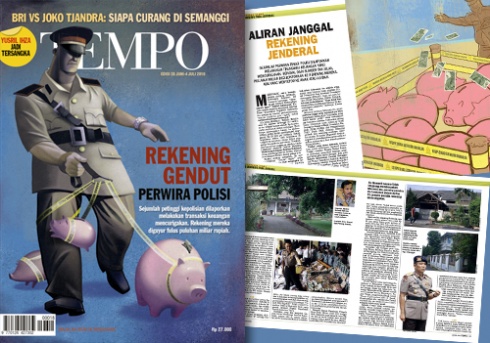 “It is only a marketing tactic,” National Police spokesman Insp. Gen. Edward Aritonang said in response to allegations that police was involved in the wholesale buying. “It’s bullshit that we bought all the copies. Where would the money come from and for what reason? We know we cannot stop the information.”

Edward did not comment directly on the allegations in the story, but he noted that making reports from the Financial Transaction Reports and Analysis Center (PPATK) public is illegal.

The National Police have vowed to sue Tempo magazine, not for its controversial story on the fat bank accounts of high-ranking members of the force but for the caricature on the cover of that edition depicting a police officer leading three piggy banks on a leash.

“We felt insulted by the cover, not with the report,” Brig. Gen. Zainuri Lubis, deputy spokesman for the National Police, said on Wednesday as reported by Jakarta Globe. “We will file a criminal and civil suit against Tempo magazine.”

Zainuri said not only had 900,000 police officers across the country been slighted, but also their families. He said if each police officer had a family that consisted of a wife and two children, there would be 3.6 million people who felt insulted.

The arguments of humiliation likely came from the perspective that Pork is “haram” (forbidden) for Muslims to eat, and the term pig is considered a strong insult to most Indonesians. Wahyu Muryadi, editor in chief of Tempo said the piggy banks on the cover represented the bank accounts referred to in the story. “There was nothing untoward in it and it’s a big misunderstanding if the police think we were trying to insult them,” he said. “We don’t have any motive to insult them and they should have approached the cover with cool heads.”

This is quite confusing and not easy to comprehend. They didn’t think they’re insulted by the corruption allegations – which are quite a surprise as if they treated these allegations as common things. They didn’t think it was a problem that public know law enforcers might be involved in systemic corruption in order to enrich themselves. Instead of that, they thought it was humiliating for police to be portrayed in magazine cover with pigs, even when those tiny cute pink things are not pigs but piggy banks (in Indonesian translated as “celengan”).

Food for Your Thought